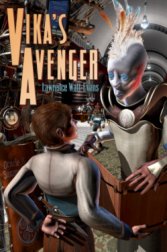 It's set twelve thousand years in the future on a planet where civilization has collapsed and been rebuilt so many times that "tech" and "magic" are indistinguishable. The city of Ragbaan is a patchwork of ancient glories and modern improvisations. Half-drowned skyscrapers stand in the harbor, airships provide intercity transport, and the city is run by assorted guilds and factions, with no functioning central government.

A young man named Tulzik Ambroz comes to Ragbaan looking for the man who murdered his sister. The only tool he has to find a single individual in a city of three million is the portrait his sister drew of the man who would later kill her. He's lucky enough to find the information brokers Azl and Hrus, and to catch the interest of a creature called the Ilm, but will that be enough?
And if he finds the killer, what will he do about it?

Because the book was originally financed through Kickstarter, we were able to afford professional book design and half a dozen interior illustrations. It's a nice-looking package. The print in the first edition was a little small, but that's been fixed in the current edition.

The trade paperback edition is $14.95.
The rack-sized paperback is $9.95, and available only from Lulu.
The Kindle edition

is $4.99.
The Barnes & Noble ebook edition is also $4.99.
There is a limited-edition hardcover available -- once a total of a hundred copies have been produced, it will be taken off sale forever, but there's still time.
The trade paperback edition is available from Amazon