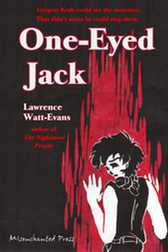 A novel by acclaimed fantasy author (and Misenchanted Press owner) Lawrence Watt-Evans, this story straddles the line between urban fantasy and horror.
One of Gregory Kraft's high school teachers meddled in what she thought was witchcraft, and cursed a handful of her students. From there, matters only got worse.
Years later, the survivors still suffer from her spells. For Greg, his curse took the form of the ability to see the ghosts and monsters around us in the night. He's afflicted with prophetic dreams as well.
In one such dream he sees a lonely, emotionally-abused boy named Jack who has been befriended by a hungry ghost that calls itself Jenny -- a ghost whose only food is human children. Jack has been appeasing the ghost with parts of himself, but he can only give up so much. He needs to find her another source of food.
He knows there are other desperate children...
Greg can see the monsters, but ordinarily he can't affect them. This time, though, he's determined to stop Jack before he turns a children's hospital into Jenny's all-you-can-eat buffet -- but how?


The trade paperback edition is $14.98.
The rack-sized paperback is $11.95 and only available from Lulu.
The Kindle edition

is $5.99.
The Barnes & Novel ebook edition and Smashwords edition are also $5.99.
The trade paperback edition