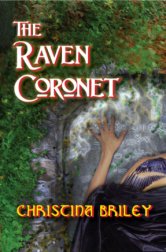 The first novel by a talented writer who has previously published only short stories.
Love, magic, and a traveling circus!
A fantasy novel in the sword & sorceress genre.
Here are a few comments from editors:


Even the youngest child in the United Lands knew the legend of the Raven Coronet -- the crown of charisma that had united the world under one ruler. But no one believed it still existed.
Or almost no one.
Young Thaedra's difficult childhood becomes an even more trying womanhood when her stepfather marries her off as part of a scheme to obtain the storied artifact. She struggles to find her own path -- but that path seems inextricably tangled with the search for the Raven Coronet.
Most people think the Coronet is a fairy tale.
Some fairy tales are best forgotten...

The trade paperback is $18.95.
The Kindle edition

and Smashwords ebook are also $3.99.
The trade paperback is also available from Barnes & Noble or Amazon

Also by this author: Twirling Jennies.